Imagine what would happen if YOU provided false information to a judge.

City Hall can’t seem to help themselves, as these past examples show:

Well, the City has done it again, this time in numerous court filings in two different lawsuits, overstating by nearly $100 million how much the city needs to spend on street paving.

The City hopes to persuade one judge to give them more time to repay money they wrongfully took from the city’s utilities … and convince another judge that he should overturn a voter-adopted measure.

With your help, we qualified Measure N for the ballot, and the voters adopted it last November.

It requires the city to gradually improve the quality of our streets & alleys to a Pavement Condition Index (or PCI) measurement of 80 – or else reduce our sales tax rate.

After we qualified Measure N for the ballot, the City hired a consultant to write an “independent” report about all of our measures, including Measure N.

This report was presented to the council back in January of last year. And it was so full of wild exaggerations and speculation that we took a fire extinguisher to the meeting in case anyone’s pants were to catch on fire.

But this report wasn’t independent at all.  In sworn declarations filed with the court, it has since been confirmed that the consultant got all his numbers from the City, so City Hall was just pretending the report was the opinion of a neutral third party.

And he gave them exactly what they wanted. It projected astronomical numbers for what it would cost to meet the Measure N street standards.  But we countered that misinformation by showing the council past city staff reports that contradicted this new report.

As recently as April 19, 2021, the City was making new court filings with two different judges – under penalty of perjury! – citing the same figure from that January 2020 report.

But then … ONE DAY LATER … on April 20, 2021, city staff posted a new report for Oxnard’s Public Works and Transportation Committee meeting scheduled for April 27, 2021.

And it showed figures about $100 million less than the numbers they argued through the campaign season ... and gave to the courts.

Our attorneys immediately pointed out to the two judges that the city had given them bad data.  And while we were at it, we pointed out that the City hadn’t disclosed to the judges another $64 million of COVID relief revenue they expect to receive from the federal government ... and another $31.8 million they will receive in gas tax funding for street repairs.

The City’s response in the next court filing was nothing short of embarrassing.

Well, yes, your Honor, we have “updated” our projections of the cost of improving the streets and the numbers we gave you were overstated by $100 million, and sure we’re getting $50 million/year of new revenues from the sales tax increase, and maybe we didn’t tell you about the $64 million of federal money, or the $31.8 million of gas tax funding, but … look here, the council adopted this resolution claiming financial hardship!!!

City Manager Alex Nguyen has been falsely portraying to the public, to the council, and to various city committees that Measure N requires the city to only use Measure O sales tax funding to do it.  It does no such thing, and all these other funding sources can either directly pay for street repairs or else free up general fund money to pay for street repairs.

We’ve noted the city manager’s penchant for playground name-calling before, but again recently the Tri-County Sentry published another of his personal attacks over Measure N.  In this Mr. Nguyen called us shysters and bamboozlers.

Also in this article, Nguyen said, “Like I said at the Public Works Committee meeting last week, only a fool would suggest an 80 PCI in Oxnard, and I stand by that.”

It’s unusual to hear a city manager calling city employees fools, but that’s what he just did.

You see, on October 25, 2016, the City's then-Director of Public Works provided this chart to the city council urging them to increase the PCI levels of the streets because it “results in better quality and lower cost,” with a PCI of 79 having about half the life cycle cost of a lower PCI of 68.  (Our current PCI is 64.) 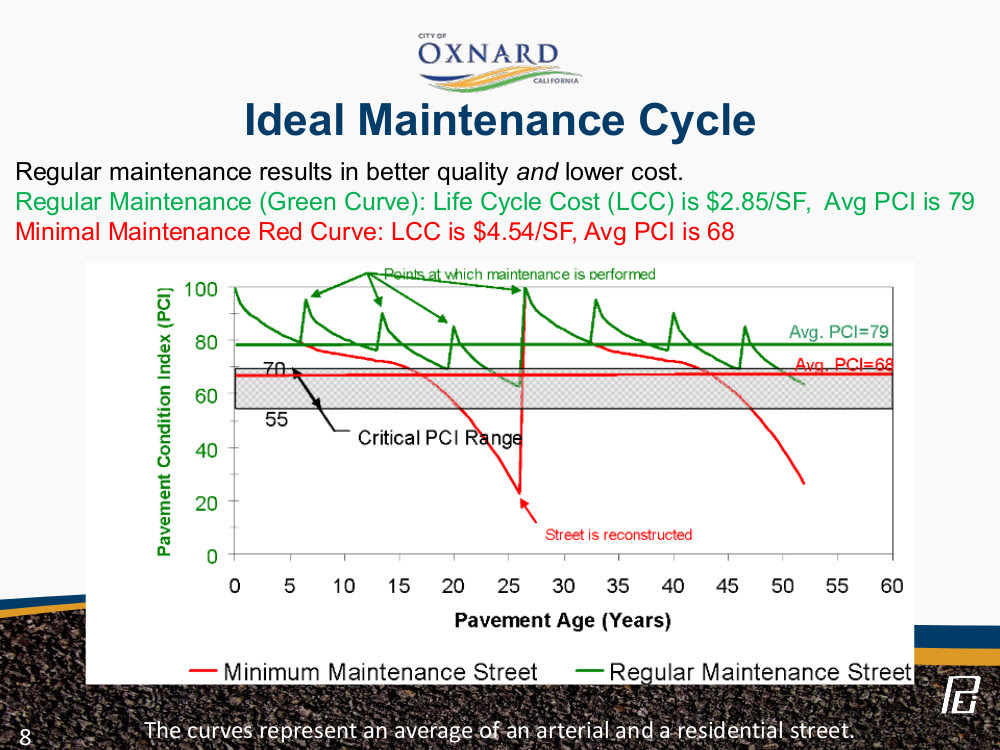 Then on July 18, 2017, yet another staff report described that a PCI range of 75-80 was “ideal,” and showed that even after the city in 2008 promised improved streets with Measure O money, the council had not budgeted for street repairs, and the streets instead got much worse.

Camarillo’s current PCI level is a 79, so we do find it curious that Oxnard’s city manager believes that it’s foolish for Oxnard residents to expect a similar level of quality as the city next door.